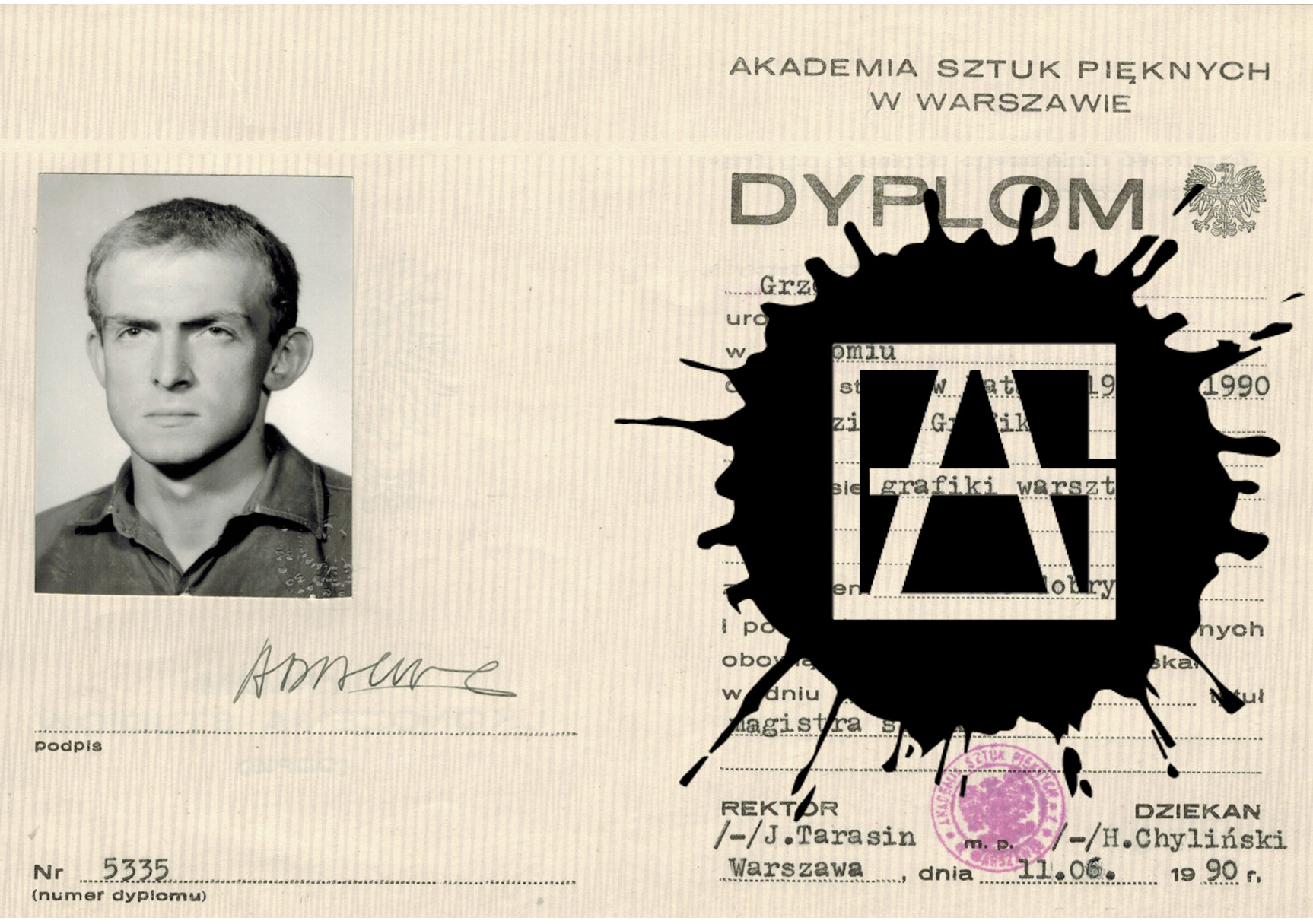 1. The shape of time

This is the title of the new series of paintings I am working on. In this project, I refer to the painterly expression of the ’80s or the times when I was to study at the Academy of Fine Arts in Warsaw. I look at the motives and inspirations that motivated me at the beginning of the creative path. I check which of the painting ideas are still alive and sufficiently strong to communicate current topics that were only borrowing and which have become outdated.

The sources of expression of those times were not uniform. As a generation, we drew from everything that gave us the strength to survive. The goal was to be sensitive at all costs. For us, young artists, everything was important. The paintings were the most important, but the appearance and sources of inspiration were also important – literature and music. In these uncertain times, everything screamed in us. I had orange hair, I wore a long black jersey like an actor from Kantor’s theater, I listened to music where today’s alternative seems to be commercial. Rebellion, punk, underground – everybody’s land. The dress code meant a whine and a bang, the shades of black dominated. There was also a color that meant differentness. He was salvation, not to let himself be trodden down in gray, into a muddy mud, and so common that a tourist from Sweden met me: Poland is a country where you do not need to have a colorful film on your camera. And so everything in the pictures will be gray.

The inspiration for me was life itself, paintings of other painters, such as those older from the Arsenal generation, but also those that I saw in magazines and albums. In those years, two letters were officially published, from which one could learn a little about what is happening in the art “behind the wall” – and with a considerable delay. These were the monthly “America” and “Britania”. Short text and a few small pictures. I have kept these bent sides to this day, as a relic. Abstract, large-format American painting. What a force this was in it! But there was also poetry, text.

In those days I read only poetry because the volume of poems was easy to slip into the pocket of the jacket. Herbert, Brodski, Cwietajew, but also Borges, Auden, O’Hara. A bus jam and frequent changes were not conducive to long focus. The short form of the poem reminded of the quick brushwork. She restored faith in the sense of art in a world in which it seemed that art was absolutely unnecessary to anyone.

The subject of my painterly reflections is a person standing in the face of the problems of his time. The uncertainty of tomorrow, identity blur, environmental pollution, the war of cultures, great migrations, the rebirth of totalitarianism, enslavement through technologies, alienation of the individual, crisis of progress – these are the main problems of the beginning of the 21st century. The way I intend to face the above themes is left open at this moment.

The shape of time is a title in a sense ambiguous. Time, in this case, means modern time, time of moment (exact moment), but also the time in the historical sense (history time). It is available to us naturally through experience here and now, but looking from a wider perspective allows us to confront distant concepts. It organizes material beings, inspirations, and influences from other paintings that are interesting to me and which remain in the sphere of theoretical considerations. In the visual sphere, it is a series of paintings – classical painting. The canvases are clear for inspirations, quotes and direct references to the beginnings of my creative path, inspired by poetry and the interest of painting in other eras. I do not think the language of the forms and the stylistics developed by those conventions suffered signs of exhaustion. I will try to prove the thesis that both the message and the way of treating contemporary themes by establishing a dialogue with history as an attitude towards painting may be interesting and open space for further development. I would like this series of paintings to bear the message: there is a huge centrifugal force in painting. It is a discipline concealing the inexhaustible possibilities of expression serving the manifestation of one’s creative attitude. I would like it to be an approach that opens the space for reflection, not a closing one, announcing a certain end.

It will be a dozen or so paintings with dimensions of 140 x 220 cm made in oil technique on canvas. The format is especially important to me. I like paintings whose size can be compared to the human scale. Image perception happens in a specific space. Due to my interests in architecture, I am close to considering the scale and the module which is a human in all aspects of space. I try to take into account both the size of the space in which the image is created and the one in which it will be exposed. The 140 x 220 cm format is also the largest I can paint in my studio due to its limited size. I will move in the field of the technique proper for oil painting on canvas. An important issue is the selection of the right support and the size and quality of painting tools.

We try to go a step further by trying our talents on the topic and technique. Why did I choose classic easel painting to achieve my artistic goal? After all, I am fluent in digital techniques in the field of image and sound processing, I have access to modern technologies – why are not I going to use them? The answer is simple. The joy of communing with painting matter. Return to the gray canvas, to the arduous process of its preparation, to manual work. The factor supporting my decision is technical fatigue, image processing machines, new media, the internet, 3D projections. In recent years, many artists have worked with sound and these were, in my opinion, the most interesting realizations that appeared in galleries. This is proof of how strong efforts are made by artists to build a comprehensive visual world using technology. Despite this, the interest in a traditional painting does not diminish.

In 2013, I traveled to China. The first day of your stay in a new country is usually significant: it is like the first impression when you meet a new person. The characteristics most characteristic of a given culture are visible on the palm of your hand. Maybe because of the time shift, or maybe because of the fatigue of a long flight, I went for a morning walk to a nearby park. I saw a group of people training tai-chi, women in traditional costumes practicing with swords, a group dancing to the rhythm of modern music flowing from a portable radio recorder. Many people were playing a comet or meditating. There was also a man with a bucket of water and a brush with a long bristle on a stick. He walked along the aisle practicing calligraphy with a dancing step. The signs he wrote quickly disappeared on the gray surface of the ground. In Chinese tradition, poetry and painting are combined. Great poets are depicted on monuments with a brush in hand. Going forward and quoting Josif Brodsky: “poetry is a memory daughter”. Where the power of poetry fails, the field for painting opens up.